In my attempt to share knowledge I would like to show you a very simple, framework agnostic, way of building highly responsive re-usable components for mobile ready websites. Mobile in this age is a default, and sorry but if you don't think that way you are already out of the game.

Widget based architecture is a concept, or a set of very simplistic rules that make all the difference. And the really cool part is that full responsiveness can be achieved using only CSS and HTML. Without the use of, learning curve heavy, third party APIs.

Blog posts with lots of text and low information are boring, so let's go into the juice. The concept is simple, let's assume that for any component of a web page that you develop you have the following rules:

So a widget is pretty much the following square, and consider the .widget notation as the class within your html (rule 1):

Let's go into an example, let's imagine that you want to have a responsive component that shows three elements side by side on wider screens and on smaller ones you want only two elements per row: 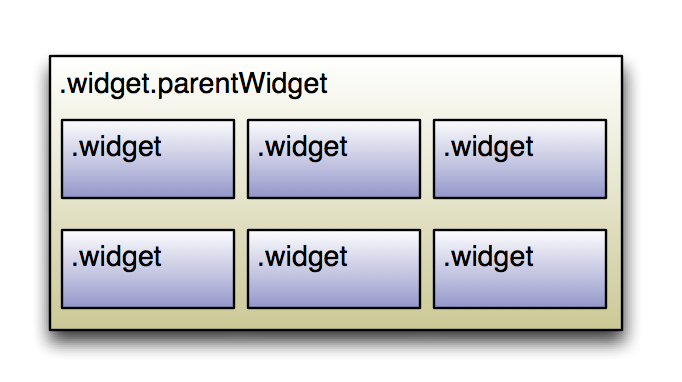 The parent widget knows he has three children. These children have no idea where they are so they just take 100% of the container (rule 2). The parent though, wants them to show side by side in groups of three, so he overwrites their width (rule 3), and set's them as floaters. Which generates this CSS:

So the parent doesn't really care what kind of children it has, the only thing he cares is that they are widgets so they will gracefully adapt to the shorter width. Although the parent can be designed to work with certain .widget types, and in this case it can overwrite some of their "visual design" properties. i.e.:

The parentWidget is 100% of it's container, so if the window re-sizes it will also re-size the parentWidget. This will allow us to have a responsive structure with one step.:

This base structure allows you to place any widget wherever you want, they will always adapt. We can then iterate on it by having each widget as an atomic component that accepts a view model. Each view model containing the data to populate the widget, allowing the base webpage to not really care what kind or what order of widgets it is receiving. But that is complex enough to build another blog post, so I'll leave it for later.

I hope this helped build a base understanding of the flexibility that Widget based architecture allows you. Now, go build widgets ;)